Published by christie cuthbert on July 29, 2019

During one summer in college, I moved home and worked at our local newspaper, the Gilroy Dispatch. It was the 25th anniversary of the Gilroy Garlic Festival that year, and my job was to scroll through old articles on film and write stories about the festivals of the past.

That summer, I interviewed founders, former garlic queens and learned everything there was to know about the festival and its inception now 41 years ago. For an outsider, it would have been an interesting job, but for a born and raised Gilroyan, the internship was an extension of my admiration and love for my little hometown. This is a town where everyone knows your parents, volunteerism is a high priority, where you can find pepper steak sandwiches at Friday night football games, and cheerleaders selling fireworks on the Fourth of July. This is a town where you may have the same neighbors for 60 years, and where old timers talk about how cherry orchards once stood where a new development is going up. For those of us who were lucky to grow up there, Gilroy becomes a part of you.

For the last 12 hours my phone has been going off non-stop, people from all over the country wondering if my family and friends are OK. I can’t log onto a website or turn on the news without seeing the images of the park I once played little league at filled with police and rescue teams.

For many who see the news, they see yet another unfortunate mass shooting in our country, which has sadly become the norm. But what people don’t understand about the Gilroy Garlic Festival from afar, is this special event that is now tainted with trauma, goes beyond music stages and food tents.

This festival embodies the spirit and love of our community in so many ways.

As the shots rang out through the festival Sunday afternoon, so many jumped on social media, worried about one another’s parents, siblings and children, because the majority of those who work the festival are local volunteers raising money for football boosters, 4-H clubs, swim teams, and more.

Everyone in this community has a connection to the festival. Everyone.

My own parents have been involved for decades, and as I heard the news, I called my mom, knowing she was working the festival. After hiding under a table while guns fired, she was evacuated and out of breath on the phone, telling me she was safe.

My best friend since second grade was grasping for breath as she fielded texts and calls, making sure her family was accounted for. Another friend from high school choir realized a bullet grazed her arm and people helped her jump a fence and get to safety.

While hearing she was OK, another friend messaged that her high school-aged niece and others ran for cover in a truck, and another reported her sister had a gun pointed in her face.

As the night moved on and the gunmen were still at large, entire neighborhoods were put on lockdown, areas were so many of the hardworking festival volunteers have lived for decades. And another childhood friend, who is now a police officer, was out looking for the shooters.

For my quaint little hometown, this is a tragedy that will impact every single person. As the sun rose on Gilroy today, so many things are uncertain. The air that is typically robust with the fragrance of fresh harvested garlic is now filled with sadness.

Most Mondays post festival are spent with volunteers at the park, removing haybales and tents, sharing in left over garlic bread and comradery about what a great weekend was had by all.

That won’t happen today. Today will be filled with confusion, wondering how yet again this can happen, and at a place that celebrates the love and connection of a community.

But I do know that from the heartache, Gilroy will eventually find strength and rise up, because of spirit of the people will conquer the evil of the few. 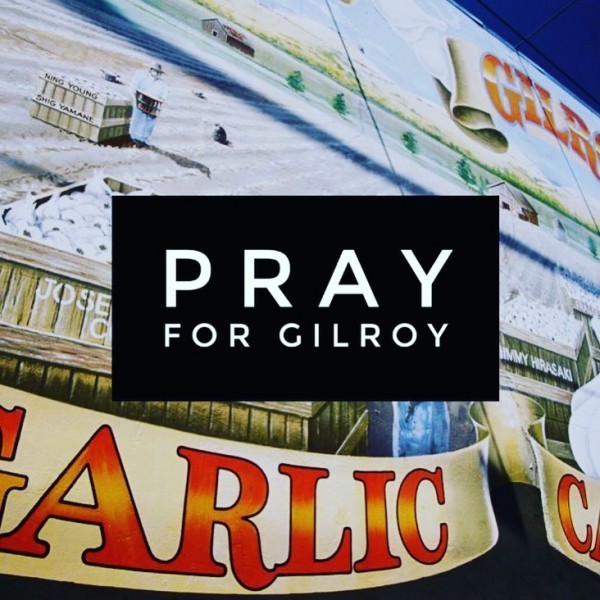