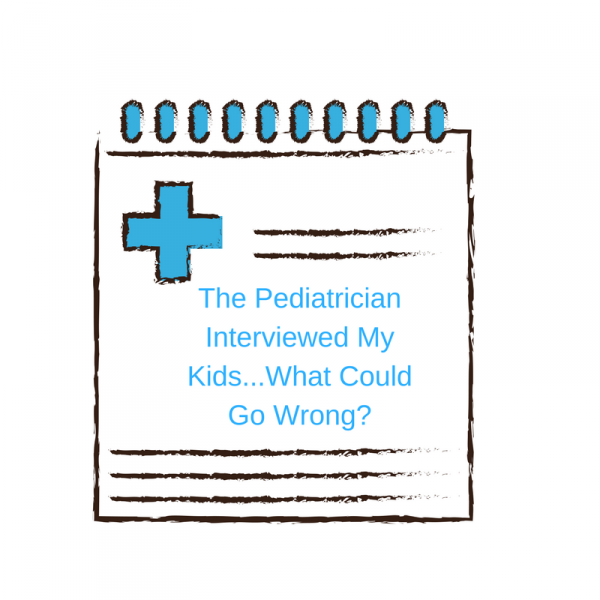 Because I am first in line for the Mother of the Year Award once again, my youngest just had his 10yr annual physical in September a full four months after his actual 10th birthday. In recent history, a four month delay is actually not so bad for me.

I am sure the doctor’s office judges me but I really don’t care. Well in reality, I do care, but not enough to motivate me to get on the ball and make the appointment in advance. The kids’ birthdays come at the same time every year, so the annual trek to the pediatrician should not come as a huge surprise. Yet somehow it does.

Because my kids are relatively healthy, these visits are pretty mundane. That is until the doctor starts going over her check list of questions. In this particular practice, kids over the age of 5 answer all questions that they are able to, themselves.

This Q&A session causes me to squirm with each child, each time. It is not that I have anything to hide, but our track record with this ritual is not stellar.

Like the time when my oldest was about 8 and he filled out the survey with questions regarding safety in the home. When the doctor came in the room, the first question she asked was, “How do you take safety precautions with the guns you have in the house?” I had a total Three Stooges moment as my head swiveled from my child (traitor) to the doctor and back again all while emitting a strange squeaking noise through my nostrils as I took huge gulps of air.

Since we had no guns, this should have been a relaxed, no-brainer moment for me. But whenever a medical professional asks you a leading question, it makes you ridiculously nervous. Like the way you hold your breath when a cop car changes lanes and is now behind you even if you are not speeding or carrying illegal drugs.

We cleared up the issue once my son explained that he had answered “yes” because we had visited a friend’s farm that had an antique gun case; which by the way was fully locked and secure. Because the question did not limit gun exposure to just your home, he took the literal route as he is prone to do whenever it simultaneously throws me under the bus. Yet, somehow the literal interpretation of everyday requests, like “Go to bed, now” are completely lost on him.

What really stings is that this same question tripped me up again on this most recent visit as he included Nerf guns and air-soft in his thought process. I really need to start doing a little prep work in the car before these appointments; my heart just can’t take it.

Another shining moment for the Stiles was my middle son’s interview with the doctor when he was approximately 5 years old. The doctor asked about his eating habits, naps and the like to which he replied briefly and shyly. I was so proud of my big boy, finally answering his own questions.

Pride turned to humiliation as he (traitor) was asked about sleeping through the night. Suddenly, he was downright chatty and effusive, supplying more information than was actually necessary. He detailed how he could always go in and sleep with his dad because mom and dad don’t sleep together in the same room.

If one was not paying close attention in that moment, one might have missed the imperceptible side-ways glance that the doctor gave me, but I saw it alright.

So, like a 4th grader in math class, I raised my hand in order to interject. The pediatrician, clearly amused by this revelation, turned to me with a look of anticipation. I carefully, and with an abundance of words and possibly hand gestures thrown in, explained that I had been sleeping with his little brother every night in order to let daddy slumber while I dealt with the digestive and breathing issues that flared up in the middle of the night. Thankfully I remembered that we weren’t on Dr. Phil and I stopped short of telling her how much I loved sleeping with my husband…

To this day, I manage to work into every appointment the fact that we do indeed sleep in the same room just in case she jumped to conclusions despite my deliberate—and truthful—explanation.

My youngest also took a ride on the literal train recently when asked about sitting in the front passenger seat. Riding shotgun has not lost its appeal since I was a kid but we do follow the safety guidelines for height and weight. So, when the doctor turned to me and said that the air bag could do serious damage to a 10-year old, I nodded in agreement. Oh, yes, dangerous indeed. Yesiree, want to avoid that air bag.

And when she went on to point out that he did not meet the recommended height and weight for a front seat passenger, I nodded and looked straight at my angel child to emphasize that this was not my rule but instead a burden for me to enforce.

Then, something clicked mid-nod and I realized that she was teaching me these rules, not reviewing them.

Man, not again! It’s like Groundhog Day with tongue depressers.

After a little more interrogation, my son revealed that he had answered “yes” to the question about riding in the front seat even though the maximum distance he had ever gone while seated there was around the block to the garage.

Those little examination rooms get hot when you think that Social Services is waiting in the lobby for you to intercept a hasty retreat.

My kids are oblivious to the havoc they wreak with these answers but I swear the doctor is thoroughly entertained. I am sure they would disagree and say that asking the pint-sized patient is merely a way to get the truth. Doctors know we parents lie to make ourselves look good; most of them are parents themselves.

In the end, I may not be Mother of the Year but as long as my kids are telling the truth, however literal or unflattering it may be for me, I guess I must have the right prescription.

What I Told My White Son About Police Brutality
The Literal Son
How do we save our toddlers from the number 1 threat to their lives?
advertisement

What I Told My White Son About Police Brutality
The Literal Son
How do we save our toddlers from the number 1 threat to their lives?