Published by Kara Lawler on December 6, 2016

My son, now over 7, fell off of a stool this afternoon when we were building a gingerbread house. While he was fine and giggling, I bent down to pick him up. And I couldn't lift him. Try as I might, I couldn't hoist him up into my arms I once deemed strong. Instead, I kissed his cheek and pulled him close. 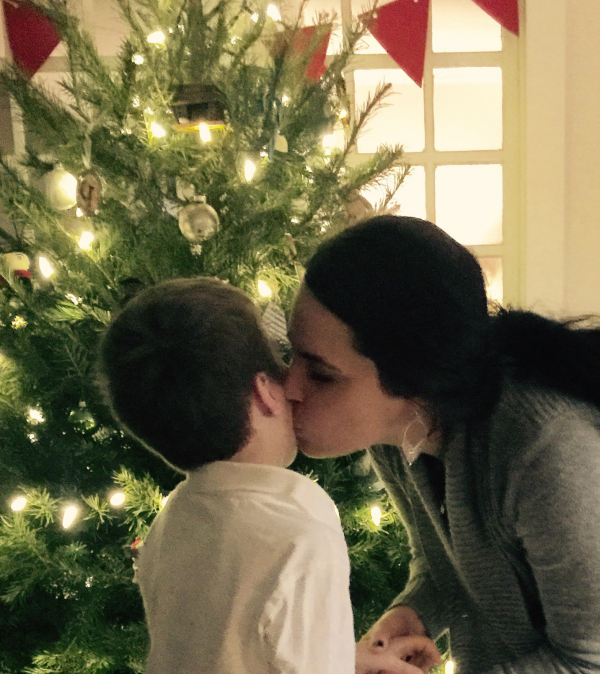 For over seven years, I've picked him up and while I knew it was coming to an end (and I have written about that before), here we are: I cannot pick him up easily or really, at all. After over seven years of carrying him until my arms hurt, bouncing him and shushing him, holding him cheek to cheek, carrying him in a sling and on my back, carrying him up the stairs and from his bed to mine, this phase has passed. And with this realization come others, as the Christmas season is upon us.

He and his sister sat for the annual photo with Santa this past weekend and when the photo was printed and given to us, I was struck by the length of his legs. Did they simply look so long because he had red pants on--pants I did pick for once and he gladly wore? Eight years ago, his legs were curled as he was tucked in my womb making me so sick I had to miss all Christmas festivities. How are they so long now?

Tonight, my children sat out their shoes for St. Nicholas and his boots are so big. I remember when his feet were small and I rubbed them as I held him and he drifted to sleep. Now, his boots are on the hearth and I can imagine them, year by year, getting bigger as I trip over the ones left at the door. How are his boots so very big? Where are his baby feet?

For years, he woke up excited to find his Elf on the Shelf and now, he forgets almost every morning to look for poor Jake. When he stumbles upon it, his surprise or delight at where Jake is seems to be feigned for his sister and me. Could it be? Could he not believe? Is this phase coming to an end?

My father has told me many times over that there is nothing as constant as change. Day by day, year by year, my son is changing. And I'm changing. And while I can't pick him up easily and his legs are so long and his boots so very big, I'm in for more magic than I'm sure I can even imagine. For there is no greater gift than watching a child grow. And I will watch as he grows and changes and while things might change, one thing remains: my love for a child with the chubbier cheeks who has been the very best gift I could have every imagined.

Years ago, sick and in bed, pregnant with him, I remember being so thankful for him, a baby I didn't know yet but had always dreamed of. Eight Christmases later, I can't carry him like I once did, starting in the womb so long ago, but I will forever hold him close even as his legs stretch and his boots get bigger. And I will kiss his cheek, Christmas after Christmas. That's its own Christmas gift and may I never forget it.

As as we start our bedtime routine, I pull him close and kiss his cheek, just as I'm doing in this photo of his first Christmas here on Earth. And through the busy times of the holiday, this is what I'll remember: the love of a boy I still hold close to kiss on his cheek. 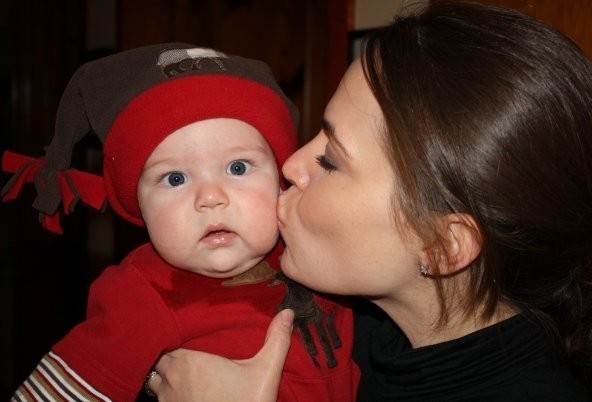 Join Kara for other stories like this on her blog, Mothering the Divide or join her on Facebook, where she posts a daily story just like this one.

Kara Lawler is the author of EVERYWHERE HOLY: Seeing Beauty, Remembering Your Identity, and Finding God Right Where You Are. More info on www.everywhereholy.com Join Kara on www.karalawler.com or on Facebook!

The Perfect Gift
Six To Sixteen: Happy Birthday To My Boy
They Just May Need You A Little More
advertisement

The Perfect Gift
Six To Sixteen: Happy Birthday To My Boy
They Just May Need You A Little More

'This cannot be happening': Mom gives birth to baby mid-flight to Orlando

Man who was adopted in 1953 thought he was an only child. Then the phone rang